Praga, capital of the Czech Republic

Praga, capital of the Czech Republic, and one of the European cities that deserve to be known. With imperial palaces, medieval castles, and gothic churches. The Moldava river crosses the city center, and the country gastronomy offers excellent local dishes.

Due to its location, Praga can be easily visited if you study in another city in Europe or stop a few days if you are doing a Eurotrip during the summer.

Anyway, before entering the country, you need to know that the currency used is not the Euro; it’s the Cezch koruna. Therefore, you will need to make a currency exchange at some point in the trip.

In our case, we arrived at Praga by train. Something cool about the city is that the attractions and must-see places are in a pretty compact area. So if you look for a place to stay surrounding the center, you can visit it in one afternoon.

If you don’t have your cash exchanged, you will see plenty of change offices where you obtain Czech Crowns. Still, honestly, the exchange rates you will find can’t compete with our rates, and you will lose more money if you make it in this way. 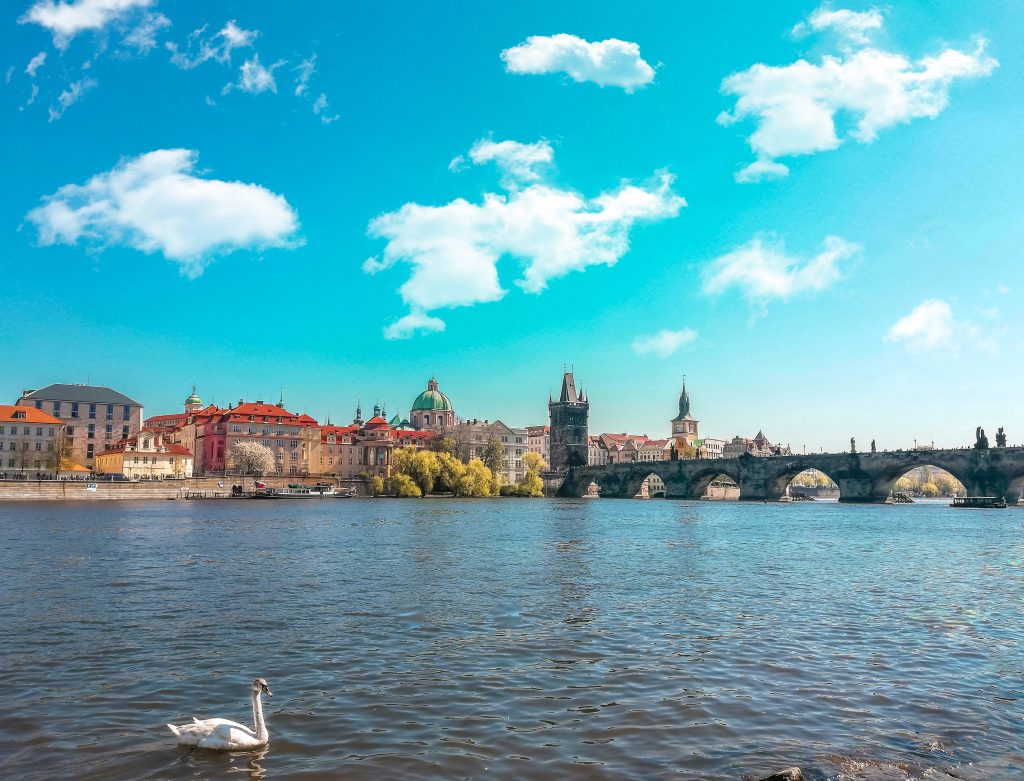 Walking around the old part of Praga, we found the Old city’s square, which has historic joys like the old town hall, where the famous Astronomical clock is located. Also, Our Lady before Tyn church, which its towers characterize the city’s landscape, if you look carefully at them, you will appreciate that one is wider than the other because they were made to represent the man and the woman.

There are plenty of chimney cake sellers following the path leading to the river. The most traditional are covered with sugar and cinnamon, but you can find them with all kinds of stuffed and toppings. If you want to try the best ones, look in a place that may be more ornamental and less like a Czech Starbucks, they do it at the moment, so you can eat it fresh and warm.

Once the river arrives, the most famous bridge connects the Old Town with the small town, or Mala Strana. The Carlos bridge is surrounded by 30 statues located on both sides. Walking it, you will appreciate one of the best views in the city. The Prague Castle, built in the 9th century, houses important monuments such as the Cathedral of San Vito or the Old Royal Palace.

After so much travel, good food is the only way to recover energy. The local gastronomy offers delicacies such as the traditional goulash, better if served in a bread pot. Or the pork knuckle, sometimes filled with roasted fries or a special sauce. We didn’t forget about the most important. Try the famous Cezch beer.

Looking to visit Praga or recently get back from seeing and have some Czech Korunas lying around? Get in touch with Foreign Currency. We are interested in fulfilling all your currency needs with our simple online process.